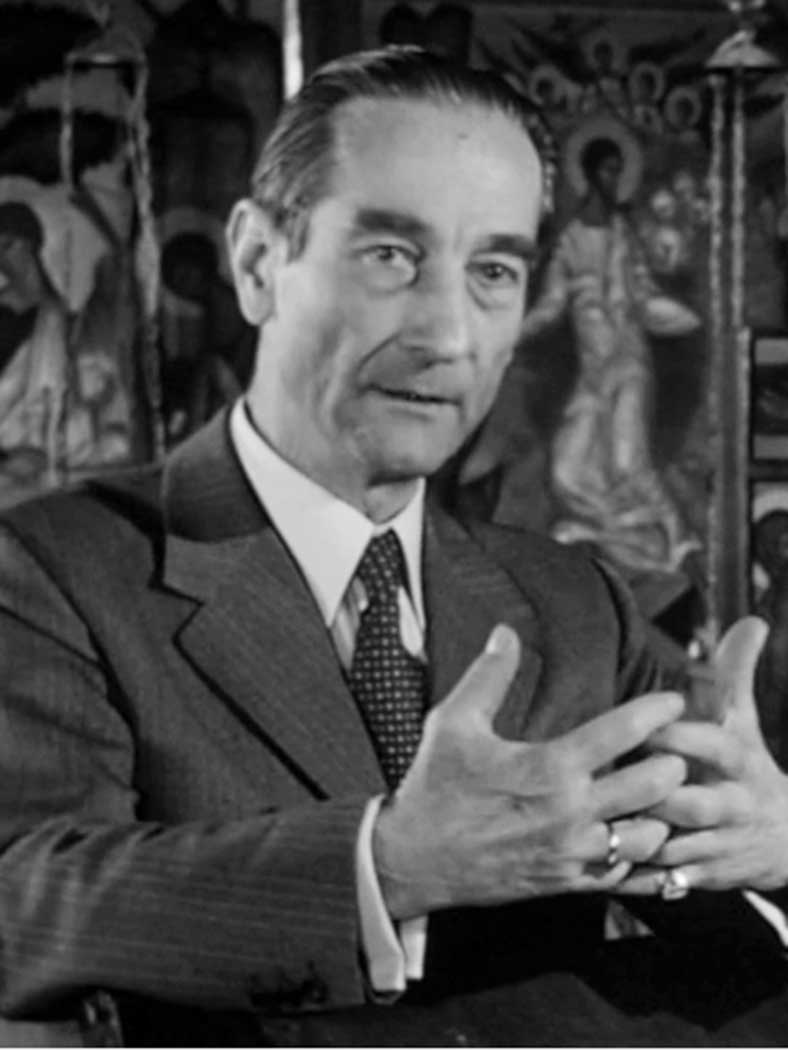 Prince Constantine Andronikof was born on July 16, 1916 in Petrograd, Russian Empire. He arrived with his mother in France in 1920, his father having remained in Soviet Russia, where he was finally executed by the Bolshevik authorities in 1937.

Constantin Andronikof studied classical literature. His thesis in 1938 for the diploma of specialized studies at the Sorbonne dealt with "the religious philosophy of Khomiakov". In 1939 he volunteered as a cadet in the Air Force. Upon demobilization, he returned to Paris and enrolled at the Institut de Théologie Saint-Serge.

In 1943 he obtained his license in theology and was ordained sub-deacon at the Saint-Alexandre-Nevsky cathedral in Paris. From 1942 to 1944 he taught French literature at the Russian high school in Boulogne. In 1944-45, he taught theology at the Institut Saint-Denis. In December 1945 he began his career at the Ministry of Foreign Affairs as an interpreter for English and Russian. In 1953, he created the AIIC (International Association of Conference Interpreters) and then took part in creating the ESIT (Higher School of Interpreters and Translators). From 1958 he was the official interpreter of the President of the Republic and of the French Government. He retired early in 1976 with the rank of Minister Plenipotentiary. In 1997, President Jacques Chirac elevated him to the rank of Commander of the Legion of Honor. In 2021, the President of the Republic of Georgia, Salomé Zourabishvili posthumously confers on her the Order of Excellence of Georgia.

He married in 1946 to Nathalie de Couriss and had three children (Emmanuel, Anne, Marc). In 1947 he obtained French nationality.

In 1965, he created the television show "Orthodoxie". From 1966 to 1994 he was a member of the diocesan council of the Archdiocese of Russian Churches in Western Europe. In 1970 he published "Le Sens des Fêtes", a theological study of the festivals of the fixed cycle. In 1971 he began his teaching of liturgical theology at the Institut Saint-Serge, which continued until 1994. From 1973 to 1994 he took charge of the organization of the “Semaine d'Études liturgiques” de Saint-Serge (seminary annual study of the Liturgy, founded in 1953 by Archimandrite Cyprien (Kern) and Dom Bernard Botte). From 1975 the Acts were published in Rome. Each year he publishes an article on a liturgical theme.

He relaunched "La Pensée orthodoxe", a publication of the work of professors at the Institut Saint-Serge.

In 1975, his translation of “The Column and the Foundation of Truth” by p. Paul Florensky is published. He founded and thus inaugurated the collection "Sophia - Pensée et religion", which he edited at L’Âge d´Homme until his death.

In 1980 he defended his doctoral thesis in ecclesiastical sciences on the Paschal Cycle, the theological study of the festivals of the mobile cycle. It was published in 1985. He also teaches apologetics which he renames methodology then gnoseology.

He was for a long time director of studies at the Institut Saint-Serge, of which he was the dean from 1991 to 1993.

In the early 1980s, he obtained the creation of the radio program "Orthodoxie" on France Culture.

In 1984 he was elected to the International Academy of Religious Sciences and in 1990 became its vice-president.

In 1984-1985 he was Visiting Professor of Liturgy at the Saint Vladimir Orthodox Theological Seminary in New York after the death of Father Alexandre Schmemann.

In 1994, he gave a cycle of his gnoseology course at the St. Tikhon Academy in Moscow.

He died on September 12, 1997 in Paris and is buried in the Russian cemetery of Sainte-Geneviève-des-Bois.

1. From English to French:

2. From Russian to French: